While a number of people developed various forms of surfboard and sail combinations, most people give credit to S. Newman Darby with his invention of the sailboard demonstrated on the Susquehanna River, Pennsylvania in 1965. He later sold his sailboards and never patented the design. Featured in several magazines of the time, other manufacturers jumped on the band wagon, and by 1984 windsurfing was selected as a sport for the first time in the Olympic Games. There are numerous windsurfing competitions held worldwide. So far, we've found a limited number of windsurfing ornaments, each of which can be personalized and arrives in our velvet pouch. 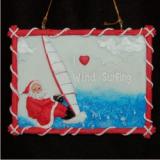