Historically, field hockey is likened to a game played with a stick where players attempt to hit a ball. By this definition, the game is routed in Chinese Beikou the earliest recorded mention of which dates from around 950 AD, and from Irish hurling dating from the late 1200s AD. Modern field hockey as we know it finds its beginning in several long-since dissolved Associations, and the official longest running hockey club in England of 1886. When Englishmen emigrated to India, they took the game with them, and when the game was internationally first recognized at the Olympic games of 1928, India won for next 20+ years. In celebration of this fine, venerable English game, our field hockey ornaments can be personalized for a special girl, with both brunette and blond options. You can also find gifts for the field hockey coach in various skin tones, as well as the #1 fan supporter of the team. 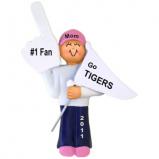 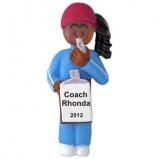 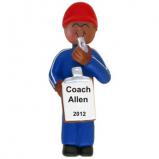 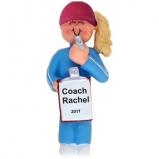 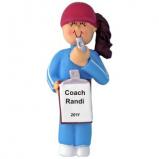 Field hockey is incredibly important and competitive in US High Schools today, and we frequently receive requests for favors or awards that celebrate each team member's accomplishments and contributions. We're happy to put together a special package for your team. Click on the Contact Us link below and send us the details of your project. We can personalize each field hockey Christmas ornament individually per player, or we can personalize the bulk of them with the team's name and/or game/championship won. For interested players and their parents, check out the premier field hockey organization in the US which includes summer camps and schedules here.