The oldest recorded soccer games in history occurred during the Han Dynasty in China around 250 B.C. At that time, a leather ball was kicked between opposing team members with the goal being to kick it into the opponent's net. Little has changed since this wonderful game was invented. Not only are there occasional fan fights today, as early as the Middle Ages the game was banned from the land for periods of time due to extreme violence between the fans of opposing teams. King Edward announced to Parliament that "Na man play at the Fute-ball" in 1424. Interestingly, the word "soccer" as used here in the United States actually originated in England to distinguish it from that other "football" game called Rugby. In the UK, the word "soccer" later fell out of favor as Rugby gained in popularity and the term reverted to "football". Here in the US, there was no need to create a confusion, so the word remained the same as originally used. It's in honor of this ancient game that we offer our soccer ornaments. Find a soccer ornament personalized for your favorite boy or girl, blond or brunette. Personalize the ornament with his or her name, the year, and their jersey number at your option. 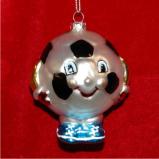 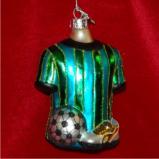 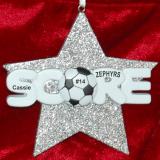 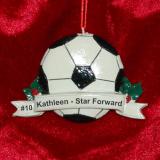 If you're having a soccer themed birthday party, coach a team of soccer players, or participate in a league, we're happy to create a special package for you. Ornaments can be purchased cheap or wholesale beginning at 12 pieces. At these low quantities, you might want to individually personalize each ornament for each player. For soccer ornaments in bulk at larger quantities, pricing can be again discounted. You can choose to order by the dozens non-personalized, or all personalized with the team name, for example. Whatever your needs, click on the Contact Us link below, and we'll be happy to create a custom soccer ornament package for you.